A conversation with Sussman on AI and asynchronous programming 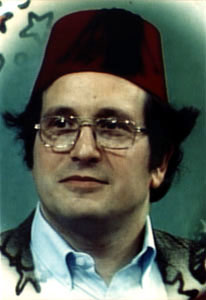 A couple weeks ago I made it to the FSF's 30th anniversary party. It was a blast in many ways, and a good generator of many fond memories, but I won't go into depth of them here. One particularly exciting thing that happened for me though was I got to meet Gerald Sussman (of SICP!) The conversation has greatly impacted me, and I've been spinning it over and over again in my mind over the last few weeks... so I wanted to capture as much of it here while I still could. There are things Sussman said that I think are significant... especially in the ways he thinks contemporary AI is going about things wrong, and a better path forward. So here's an attempt to write it all down... forgive me that I didn't have a real tape recorder, so I've written some of this in a conversational style as I remember it, but of course these are not the precise things said. Anyway!

I wasn't sure initially if the person I was looking at was Gerald Sussman or not, but then I noticed that he was wearing the same "Nerd Pride" labeled pocket protector I had seen him wear in a lecture I had watched recently. When I first introduced myself, I said, are you Sussman? (His first reply was something like to look astonished and say, "am I known?") I explained that I've been reading the Structure and Interpretation of Computer Programs and that I'm a big fan of his work. He grinned and said, "Good, I hope you're enjoying it... and the jokes! There's a lot of jokes in there. Are you reading the footnotes? I spent a lot of time on those footnotes!" (And this point my friend David Thompson joined me, and they both chuckled about some joke about object oriented programmers in some footnote I either hadn't gotten to or simply hadn't gotten.)

He also started to talk enthusiastically about his other book, the Structure and Interpretation of Classical Mechanics, in which classical engineering problems and electrical circuits are simply modeled as computer programs. He expressed something similar to what he had said in the forementioned talk, that conventional mathematical notation is unhelpful, and that we ought to be able to express things more clearly as programs. I agreed that I find conventional mathematical notation unhelpful; when I try to read papers there are concepts I easily understand as code but I can't parse the symbolic math of. "There's too much operator overloading", I said, "and that makes it hard for me to understand in which way a symbol is being used, and papers never seem to clarify." Sussman replied, "And it's not only the operator overloading! What's that 'x' doing there! That's why we put 'let' in Scheme!" Do you still get to write much code or Scheme these days, I asked? "Yes, I write tens of thousands of lines of Scheme per year!" he replied.

I mentioned that I work on distributed systems and federation, and that I had seen that he was working on something that was called the propagator model, which I understood was some way of going about asynchronous programming, and maybe was an alternative to the actor model? "Yes, you should read the paper!" Sussman replied. "Did you read the paper? It's fun! Or it should be. If you're not having fun reading it, then we wrote it wrong!" (Here is the paper, as well as the documentation/report on the software... see for yourself!) I explained that I was interested in code that can span multiple processes or machines, are there any restrictions on that in the propagator model? "No, why would there be? Your brain, it's just a bunch of hunks of independent grey stuff sending signals to each other."

At some point Sussman expressed how he thought AI was on the wrong track. He explained that he thought most AI directions were not interesting to him, because they were about building up a solid AI foundation, then the AI system runs as a sort of black box. "I'm not interested in that. I want software that's accountable." Accountable? "Yes, I want something that can express its symbolic reasoning. I want to it to tell me why it did the thing it did, what it thought was going to happen, and then what happened instead." He then said something that took me a long time to process, and at first I mistook for being very science-fiction'y, along the lines of, "If an AI driven car drives off the side of the road, I want to know why it did that. I could take the software developer to court, but I would much rather take the AI to court." (I know, that definitely sounds like out-there science fiction, bear with me... keeping that frame of mind is useful for the rest of this.)

"Oh! This is very interesting to me, I've been talking with some friends about how AI systems and generative software may play in with software freedom, and if our traditional methods of considering free software still applied in that form," I said. I mentioned a friend of a friend who is working on software that is generated via genetic programming, and how he makes claims that eventually that you won't be looking at code anymore, that it'll be generating this black box of stuff that's running all our computers.

Sussman seemed to disagree with that view of things. "Software freedom is a requirement for the system I'm talking about!" I liked hearing this, but didn't understand fully what he meant... was he talking about the foundations on top of which the AI software ran?

Anyway, this all sounded interesting, but it also sounded very abstract. Is there any way this could be made more concrete? So I asked him, if he had a student who was totally convinced by this argument, that wanted to start working on this, where would you recommend he start his research? "Read the propagators paper!" Sussman said.

OH! Prior to this moment, I thought we were having two separate conversations, one about asynchronous programming, and one about AI research. Suddenly it was clear... Sussman saw these as interlinked, and that's what the propagator system is all about!

One of the other people who were then standing in the circle said, "Wait a minute, I saw that lecture you gave recently, the one called 'We Don't Really Know How to Compute!', and you talked about the illusion of seeing the triangle when there wasn't the triangle" (watch the video) "and what do you mean, that you can get to that point, and it won't be a black box? How could it not be a black box?"

"How am I talking to you right now?" Sussman asked. Sussman seemed to be talking about the shared symbolic values being held in the conversation, and at this point I started to understand. "Sure, when you're running the program, that whole thing is a black box. So is your brain. But you can explain to me the reasoning of why you did something. At that point, being able to inspect the symbolic reasoning of the system is all you have." And, Sussman explained, the propagator model carries its symbolic reasoning along with it.

A more contrived relation to this in real life that I've been thinking about: if a child knocks over a vase, you might be angry at them, and they might have done the wrong thing. But why did they do it? If a child can explain to you that they knew you were afraid of insects, and swung at a fly going by, that can help you debug that social circumstance so you and the child can work together towards better behavior in the future.

So now, hearing the above, you might start to wonder if everything Sussman is talking about means needing a big complicated suite of natural language processing tools, etc. Well, after this conversation, I got very interested in the propagator model, and to me at least, it's starting to make a lot of sense... or at least seems to. Cells' values are propagated from the results of other cells, but they also carry the metadata of how they achieved that result.

I recommend that you read the materials yourself if this is starting to catch your interest. (A repeat: here is the paper, as well as the documentation/report on the software... see for yourself!). But I will highlight one part that may help drive the above points more clearly.

The best way to catch up on this is to watch the video of Sussman talking about this while keeping the slides handy. The whole thing is worth watching, but about halfway through he starts talking about propagators, and then he gets to an example of where you're trying to measure the height of a building by a variety of factors, and you have these relationships set up where as information is filled in my a cell's dependencies, that cell merges what it already knows about the cell with what it just learned. In that way, you might use multiple measurements to "narrow down" the information. Again, watch the video, but the key part that comes out of the demonstration is this:

What's so special about this? Well, the fall-time has been updated to a more narrow interval... but that last part (shadow and super) are the symbols of the other cells which propagated the information of this updated state. Pretty cool! And no fancy natural language parsing involved.

There's certainly more to be extrapolated from that, and more to explore (the Truth Maintenance Systems are particularly something interesting to me). But here were some interesting takeaways from that conversation, things I've been thinking over since:

Thought of the morning: people often say "we have variables and comments because programming languages are for humans, not computers". But if computers were really at the point where they were able to program themselves, and I mean really do it (even invent and code new things, and I don't mean genetic algorithm bullshit, I mean thinking about design... so this also means code as more than just "learning", but actually planning and programming something new), would they need variable names and comments?

My thinking is: yes, or they'd need something like it. If you don't have this, this means you're effectively reverse engineering "purpose" in the codebase all the time, which can be both expensive and faulty. I think any AI that's not some ~dumb application of known heuristics will need to be able to "think" about the code at point, and knowing the reason for a code change is important. So of course relevant information should be recorded in that portion of the code.

Now, does that mean something as messy as English will be used (as the majority of present code is written in English)? I doubt it. Probably something like Lojban will be used. Maybe it will not even be plaintext code: it could be machine-readable, machine-contemplatable code with "byte compiled lojban", or similar.

Relatedly, in the (glorious???) future where machines can think and design programs, assuming enough resources exist to keep said machines running, humans will have to interface with computers on a computer's level more often. Will Lojban as a second language be mandated in schools?