By Christine Lemmer-Webber on Wed 14 December 2011 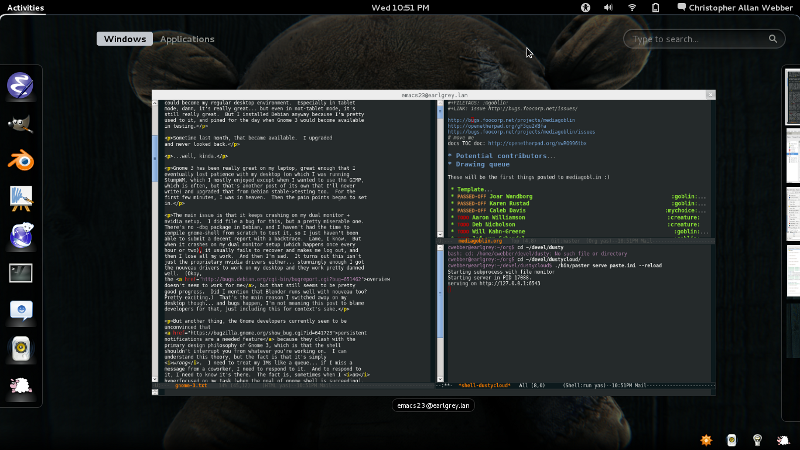 There's been plenty of discussion on the blogosphere already about Gnome 3 already, and I'm not sure this post will add much to it, but whatever. A lot of people hate it. A lot of people love it. A few people love it, but hate certain things about it, but are optimistic that things are bound to get better in the future, in which case they will completely love it. I'm in that latter camp.

Let me put it this way: I recently got a new laptop, a Thinkpad X220 tablet with a gorilla glass screen (yes I am trying to make you jealous, because this is probably the best computing purchase I have ever made in my life) and before I wiped windows and installed Debian testing on it, I decided to try out a Fedora 15 live USB key to see how nicely gnome 3 felt. I instantly began to crave that this could become my regular desktop environment. Especially in tablet mode, damn, it's really great... but even in not-tablet mode, it's still really great. But I installed Debian anyway because I'm pretty used to it, and pined for the day when Gnome 3 would become available in testing.

Sometime last month, that became available. I upgraded and never looked back.

Gnome 3 has been really great on my laptop, great enough that I eventually lost patience with my desktop (on which I was running StumpWM, which I mostly enjoyed except when I wanted to use the GIMP, which is often, but that's another post of its own that I'll never write) and upgraded that from Debian stable->testing too. For the first few minutes, I was in heaven. Then the pain points began to set in.

The main issue is that it keeps crashing on my dual monitor + nvidia setup. I did file a bug for this, but a pretty miserable one. There's no -dbg package in Debian, and I haven't had the time to compile gnome-shell from scratch to test it, so I just haven't been able to submit a decent report with a backtrace. Lame, I know. But when it crashes on my dual monitor setup (which happens once every hour or two), it usually fails to recover and makes me log out, and then I lose all my work. And then I'm sad. It turns out this isn't just the proprietary nvidia drivers either... stunningly enough I got the nouveau drivers to work on my desktop and they work pretty damned well. (Okay, the overview doesn't seem to work for me, but that still seems to be pretty good progress. Did I mention that Blender runs well with nouveau too? Pretty exciting.) That's the main reason I switched away on my desktop though... and bugs happen, I'm not meaning this post to blame developers for that, just including this for context's sake.

But another thing, the Gnome developers currently seem to be unconvinced that persistent notifications are a needed feature because they clash with the primary design philosophy of Gnome 3, which is that the shell shouldn't interrupt you from whatever you're working on. I can understand this theory, but the fact is that it's simply wrong. I need to treat my IMs like a queue... if I miss a message from a coworker, I need to respond to it. And to respond to it, I need to know it's there. The fact is, sometimes when I am hyperfocused on my task (when the goal of gnome shell is succeeding), I will miss the subtle hints of messages, and I need to come back to them at some point. Anyway, there's an extension for that, but it requires gnome-shell 3.2, and Debian testing only has 3.0 in testing at the time of writing. Which means I'm back to pining for a gnome-shell Debian release. I think this is a bigger deal than the developers are acknowledging, and it's something that should be provided by default; 3 of my coworkers switched to gnome shell then switched away to XFCE largely because of this issue. That's a pretty big deal, and I think it's something that should be addressed part of Gnome core, as not everyone will learn how to install extensions (not everyone will in Firefox either).

But here are a few counterpoints to that: extensions do exist, and they seem to be capable of doing a hell of a lot (even including providing a tiling window manager if you're willing to run a modified mutter). And people who are doing the most complaining like "Gnome ruined everything! We had a perfect desktop! It's all dead because the Gnome developers killed the free software desktop!" I wonder how many of these people were around for Gnome 2.0, which was also not a perfect desktop either. In fact, around Gnome 2.0 I also switched away from Gnome in frustration, experimented with a bunch of different window managers, and eventually came back somewhere around 2006 and was surprised to find that everything was just so damned... pleasant. I think the same thing is going to happen to Gnome 3 also. In fact it already is. And I think this guy put it right: thanks to extensions, and given some time, plenty of users can be frog-boiled into loving the change in desktop paradigm. That is, assuming that the developers and designers can come to be convinced that walls users are running into are real walls. And they probably will.

One last thing, and this might be rude. I've had a number of friends who have been involved more closely in GNOME than I am complain that there's a large amount of cliquishness in the GNOME world, and even between separate parts of the contributor teams (developers and designers not really talking and working directly together?). I don't really know if that's true for sure, I don't work directly on GNOME, but I trust the friends who have said it, and I've certainly seen plenty of other projects do this at least. I've felt pretty strongly that avoiding this kind of cliquishness in MediaGoblin has been a big win for us. I hope it isn't true for GNOME, and if it is, that they can work on trying to avoid that. But maybe I'm just talking out of my ass on this one. I would prefer that I was. But if not, hopefully people can realize that in-crowds in projects are not the way to go.

Anyway, a sure sign that Gnome 3 is the future for me at least is that when I am using XFCE on my desktop, I do keep moving my mouse to the upper left corner and being sad when nothing happens. I keep using my laptop more because Gnome 3 is working there. And I keep refreshing the status of Gnome 3.2 in Debian page. Given enough time, and assuming the developers can take the needs of their users seriously, I do think Gnome 3 is the free software desktop that most people will come to love.

Or, at least, ten years in the future when contributors kick off Gnome 4, I think Gnome 3 will be the desktop that everyone will be upset at being taken away and replaced with something else.