Memories of a march against DRM

By Christine Lemmer-Webber on Wed 23 March 2016 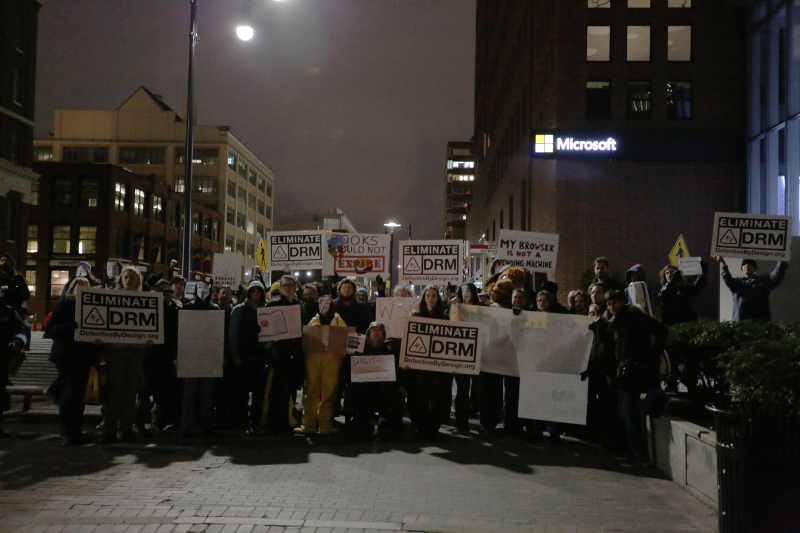 {#Protesting EME before the Microsoft building; CC BY 3.0}

I participated in a rally against the W3C endorsing DRM last Sunday. I know it was recorded, but I haven't seen any audio or video recordings up yet, and some friends have asked what really happened there. I thought I'd write up what I remembered.

First, some context: the rally (and subsequent roundtable discussion) wasn't officially part of LibrePlanet, but it did happen right after it. This was one of the busiest free software focused weeks of my life, and just earlier in the week I had been participating in the Social Web Working Group at the W3C, trying to hammer out our work on federation and other related standards. I'm so excited about this work, that it stands out in an interesting contrast to my feelings on a different "standards in the W3C" issue: the real danger that the W3C will endorse DRM by recommending the Encrypted Media Extensions specification.

This specification does not define a content protection or Digital Rights Management system. Rather, it defines a common API that may be used to discover, select and interact with such systems as well as with simpler content encryption systems. Implementation of Digital Rights Management is not required for compliance with this specification: only the Clear Key system is required to be implemented as a common baseline.

Whew! That doesn't sound so bad does it? Except, oh wait, reading this you might think that this isn't about DRM at all, and that's an intentional piece of trickery by the authors of this specification. As Danny O'Brien later said at the panel (I'm paraphrasing here): "While it's true that the specification doesn't lay out a method for implementing DRM, it instead lays out all the things that surround this hole. The thing is, it's a DRM shaped hole, and indeed DRM is the only thing that fits in that hole."

So once you look at it that way, yes, it's a DRM-enabling specification. We have other programs and standards for handling "encryption". Encryption is good, because it empowers users. The goal of this specification is to make space for something to fit onto your computer to strip you of your computing power and freedom.

With that said, onto the memories of the evening.

The march started outside MIT’s Ray and Maria Stata Center, where the W3C offices are. There were a good number of people there, though I didn't count them. I'm guessing it was 50 or so people, which is not bad turnout at all for a post-busy-conference everyone-is-probably-exhausted march. Despite anticipating being totally exhausted, I was surprised to find that I wasn't, and neither was anyone around me. Everyone seemed super fired up.

There were some speeches from Harry Halpin and Zak Rogoff and myself to kick things off. I don't remember Harry or Zak's speeches at this stage, though I remember thinking they were pretty good. (Harry made clear that he was a W3C staff member but was acting in his own capacity.)

As for what I said, here's my rough memory:

I started MediaGoblin from the goal and vision of preserving the decentralized nature of the World Wide Web in the growing area of media publishing, through audio, video, images, and so on. Thus I was proud to join the W3C in the standards work on our work formalizing federation through ActivityPub and by participating in the Social Web Working Group. But if the W3C enables EME, it enables DRM, and this threatens to undermine all that. If this were to apply to video only, this would be threat enough to oppose it. But once that floodgate opens, DRM will quickly apply to all types of documents distributed through the web, including HTML and JavaScript. The W3C's lasting legacy has been to build a decentralized document distribution network which enables user freedom. We must not allow the W3C to become an enemy of itself. Don't let the W3C lower its standards, oppose DRM infecting the web!

A lot of things happened, so let me move on to memory from what happened from there in bulleted list form:

And so, that was my Sunday evening. If you were going to tell me that I would end the last evening of the last day of the week even more energized than when I began it (especially after a week as busy as that!), I would not have believed you. But there it is! I'm glad I got participate.

For more coverage, read up at Defective By Design, Motherboard, and BoingBoing. Oh yeah, and sign the anti-DRM petition while you're at it!