Iced tea and related cold beverages, at home and cheap

By Christopher Lemmer Webber on Mon 01 May 2017

In spring through fall, we always have a couple of pitchers (one decaf and one caffeinated) of "iced tea" in the fridge (though it's not necessarily the tea plant, if you care about that term... personally I think people are a bit snobby about having only one plant be The Acceptable Drink Herb). It's easy enough... just get a pitcher, add some tea bags to it (or loose tea in some sort of reusable loose-tea-holder or something, but honestly I'm too lazy for that) and some sweetener if that's your bag (we've been using stevia + erythritol sweetener stuff, sold as Truvia or whatever) and fill it with water, stirring once.

Now put it in the fridge.

You're done! You now have a delicious cold beverage that you can drink whenever and which costs about as little as a flavored beverage can.

Takes up some space in the fridge, but IMO it's worth it. And hey, better than filling it up with soda probably...

I've never foodblogged before, but today I am compelled to start. For today is Morgan's 25th birthday, and in honor of that I've created something so delicious it must be shared with the world. Behold: 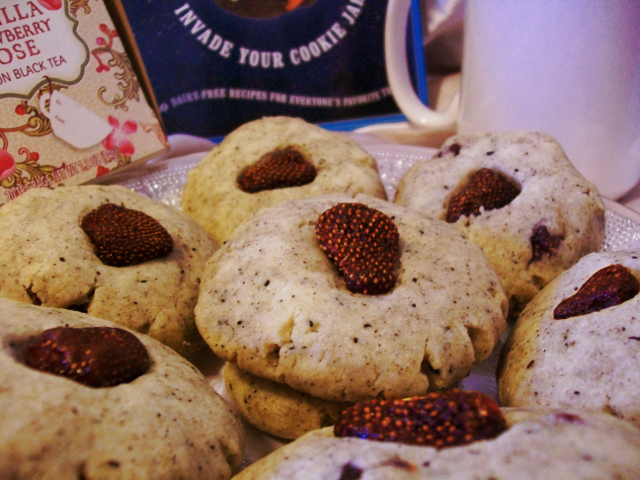 Morgan's favorite tea is Celestial Seasoning's Vanilla Strawberry Rose Ceylon Black Tea. Also, Morgan alleges that her "favorite food group is cookies". (I'm pretty sure she's confused, as last time I'd checked cookies weren't a food group, but I guess I won't argue the point on her birthday.) I figured that a good gift this year would be to combine her two favorite tea with her favorite, *ahem*, food group. The result? Strawberry vanilla rose black tea cookies!

I adapted the recipe from the recipe for shortbread cookies from the excellent Vegan Cookies Invade Your Cookie Jar's shortbread cookie recipe (so yes, these cookies are vegan too). I'm actually no good at baking, but these came out perfect, even despite the fact that I accidentally spilled a little bit of water into the dough (I had to bake them for a few minutes longer and I added about two tablespoons more flour to the mix, but they turned out just fine). I'm going to assume you aren't going to spill water into your cookies, so here's the recipe without that detail. (A good portion of the text is from VCIYCJ, which is a good book so far and is really what makes the recipe so awesome and idiot-proof.)

Miro 2.0 is shaping up pretty fast, but I'm actually working on the Miro Guide presently. New versions of both should be launching pretty close to each other, if not at the same time. I'm pretty confident in a super-awesome-release. But between that, the holidays, the upcoming wedding, and my efforts to improve my Blender skills, things are pretty busy.

Anyway, that has nothing to do with the title of this post. I am going to go on a bit of a random rant.

I've recently been playing with food dehydration, fermentation, pickling, and other forms of food preservation that don't require refrigeration. (No reason other than it's just a really interesting thing to learn about.) In the process of experimenting on how to make my own vegetarian teriyaki jerky using tofu, tempeh, and seitan (the tofu and tempeh turned out to be the most interesting... seitan was a bit too brittle for my taste, though it was the one that looked most like beef jerky) I ended up wandering the aisles of the local asian grocery store to refresh my supply of those ingredients. I ended up impulsively picking up a bamboo steamer (a Mushiki). I didn't know how it worked... I just bought it. It was only 6 bucks. It may have been the best impulsive 6 bucks I ever spent.

I had a pot that it fit perfectly over. I put some water on to boil, chopped up some vegetables, tossed in some extra firm tofu and vegetarian fake duck (really just seasoned, canned Seitan). Put it over the pot to steam for 5 minutes. I was surprised at how fast and effortless it all was. Anyway, put the food into a bowl and poured some teriyaki sauce over top. Mixed it up, dug in.

I was totally astonished at how delicious the vegetables were. I have never enjoyed vegetables so much in all my life. It wasn't a complex meal, it was healthy, and it was totally delicious. And oddly enough, I was full.

The next night I chopped up a banana and an apricot, threw in a raspberry and a cherry, and steamed it all for 5 minutes. I almost fell over. It was the most delicious desert I had ever eaten. No added sugar or anything.. was just fantastic on its own.

Since then I have also steamed and eaten: a leek bun, a red bean bun, and some edamame. All fantastic.

Not really much more to this post than that. I am just astounded that I have never played with this form of cooking until now.