By Christine Lemmer-Webber on Tue 15 February 2011

In December Rob Myers contacted me about a commision of making a urinal in Blender as CC BY-SA 3.0. He wanted to get it 3d printed via Shapeways, etc. I agreed to it with moderate enthusiasm. Most of the things I do are more gobliny or monsterish. But, I figured, Rob Myers is such an awesome free culture advocate and a good friend, it would be a challenge to do something different, and that it would be pretty awesome to see a model of mine 3d printed. Besides, how long could an object that looked so simple take?

Well it ended up taking about 5 times longer than I expected. But the results, I thought, were pretty good: 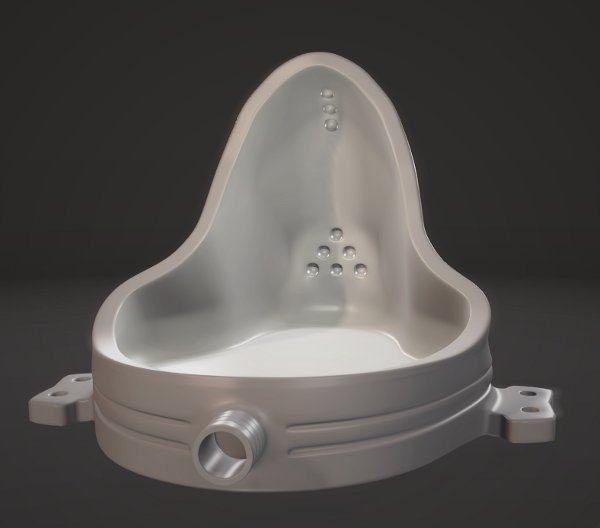 As usual, I neglected blogging about cool things once I'd done them, but Rob Myers pushed it all over the place. First a post on his blog called Freeing Art History: Urinal. Then he uploaded it to Thingiverse and... super cool... BotFarm (from the MakerBot people!) printed one. It looks super cool. Click that last link. Click it!

But last, and most awesomely, Rob got his Shapeways urinal print, which looks super awesome. And guess what? BoingBoing picked it up! Holy cow, I'm on BoingBoing!

Anyway, the urinal.blend is available if you want to open it in Blender (also CC BY-SA 3.0 Unported licensed). Hopefully you can have fun using it (digitally or physically)! I also have some renders from alternate angles up if you want to look at those.

Anyway, sometimes when I do things, I think "maybe I should blog about or promote these things". But then I feel like they aren't that impressive, don't matter too much, and sometimes I lose enthusiasm for putting them out there (which is somewhat ironic since a good portion of my life is about encouraging other people to put things out there in a free-as-in-freedom manner). I guess maybe the biggest thing I've learned from this is that maybe I should be more confident and enthused about showing the cool things I've done. Thanks Rob, for giving me an opportunity to learn that. :)

PS: I mentioned that most of my 3d modeling involves monsters, spaceships, robots, etc, and that here was an excuse to do something different. But that didn't stop me from making a spaceshipified version. :)