Last night at OSCON I attended the lightning talks (here called "Ignite Talks"). Most of them were pretty good (I especially loved Emily Dunham's "First Impressions (the value of the 'noob')" talk), but the last talk of the night was titled "Why I don’t use the GPL" by Shane Curcuru, "VP of Brand Management at the Apache Software Foundation" (the association of which he invoked during his talk last night, which made me wonder if he was speaking on behalf of the ASF, which seemed surprising). (Edit: this was confirmed to not have been intended to be speaking on behalf of the ASF, which is good to hear. I don't have a recording so I'm not sure if Shane invoked his association or if the person doing the introducing did.)

It was a harsh talk. It was also the last talk of the night, and there was really no venue to respond to it (I looked to see if there would be future lightning talk slots at this conference, but there aren't). Though the only noise from the audience was applause, I know that doesn't mean everyone was happy, just polite... a number of my friends got up and left in the middle of the talk. But it needs a response... even if the only venue I have at the moment is my blog. That'll do.

So let me say it up front: my name is Chris Lemmer-Webber, and I am pro-GPL and pro-copyleft. Furthermore, I'm even pro-permissive (or "lax") licensing; I see no reason our sides should be fighting, and I think we can work together. This is one reason why this talk was so disappointing to me.

There's one particular part of the talk that really got to me though: at one point Shane said something along the lines of "I don't use copyleft because I don't care about the source code, I care about the users." My jaw dropped open at that point... wait a minute... that's our narrative. I've written on this before (indeed, at the time I thought that was all I had to say on this subject, but it turns out that's not true), but the most common version of anti-copyleft arguments are a "freedom to lock down" position (see how this is a freedom to remove freedoms position?), and the most common form of pro-copyleft arguments are a "freedom for the end-user" position.

Now there is an anti-copyleft position which does take a stance that copyleft buys into a nonfree system -- you might see this from the old school BSD camps especially -- a position that copyright itself is an unjust system, and to use copyright at all, even to turn the mechanisms of an evil machine against itself as copyleft does, is to support this unjust system. I can respect this position, though I don't agree with it (I think copyleft is a convenient tactical move to keep software and other works free). One difficulty with this position though is to really stay true to it, you logically are against proprietary software far more than you are against copyleft, and so you had better be against all those companies who are taking permissively licensed software and locking it down. This is decidedly not the position that Shane took last night: he explicitly referenced that the main reason you want to use lax licensing and avoid copyleft is it means that businesses are more willing to participate. Now, there are a good number of businesses which do work with copyleft, but I agree that anti-copyleft sentiments are being pushed from the business world. So let me parse that phrasing for you: copyleft means that everyone has to give back the changes that build upon your work, and not all businesses want to do this. The "businesses are more willing to participate" means that businesses can use your project as a stepping stone for something they can lock down. Some businesses are looking for a "proprietary differentiation point" to lock down software and distinguish themselves from their competitors.

As I said, I am not only pro-copyleft, I am also pro-permissive licensing. The difference between these is tactics: the first tactic is towards guaranteeing user freedom, the second tactic is toward pushing adoption. I am generally pro-freedom, but sometimes pushing adoption is important, especially if you're pushing standards and the like.

But let's step back for a moment. One thing that's true is that over the last many years we've seen an explosion of free and open source software... at the same time that computers have become more locked down than ever before! How can this be? It seems like a paradox; we know that free and open source software is supposed to free users, right? So why do users have less freedoms than ever? Mobile computing, the rise of the executable web, all of this has FOSS at its core, and developers seem to enjoy a lot of maneuverability, but computers seem to be telling us more what we can and can't do these days than we tell them. And notice... the rise of the arguments for permissive/lax licensing have grown simultaneously with this trend. 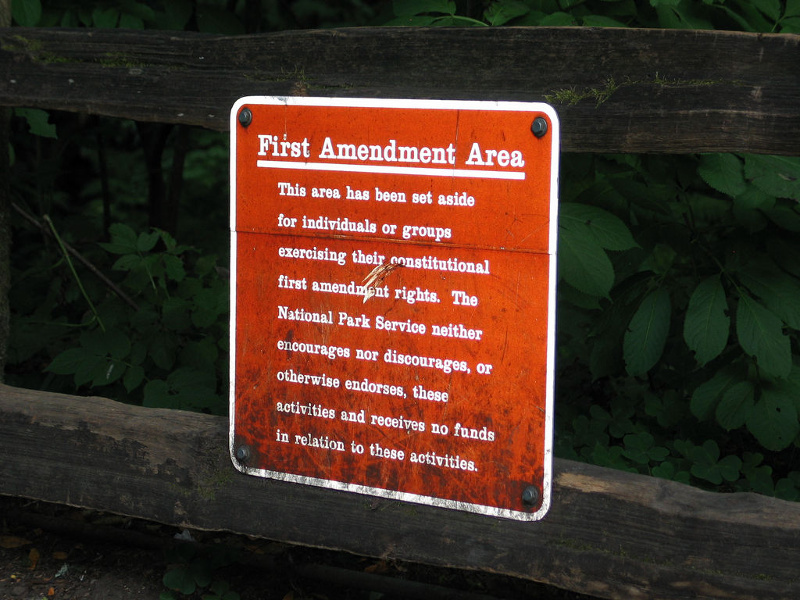 This is no coincidence. The fastest way to develop software which locks down users for maximum monetary extraction is to use free software as a base. And this is where the anti-copyleft argument comes in, because copyleft may effectively force an entity to give back at this stage... and they might not want to.

In Shane's talk last night, he argued against copyleft because software licenses should have "no strings attached". But the very strategy that is advocated above is all about attaching strings! Copyleft's strings say "you can use my stuff, as long as you give back what you make from it". But the proprietary differentiation strategy's strings say "I will use your stuff, and then add terms which forbid you to ever share or modify the things I build on top of it." Don't be fooled: both attach strings. But which strings are worse?

To return to the arguments made last night, though copyleft defends source, in my view this is merely a strategy towards defending users. And indeed, as in terms of where freedoms lie between those who make use of the source and code side of things vs the end-user-application side of things, one might notice a trend: there are very few permissively licensed projects which aim at end users. Most of them are stepping stones towards further software development. And this is great! I am glad that we have so many development tools available, and it seems that permissive/lax licensing is an excellent strategy here. But when I think of projects I use every day which are programs I actually run (for example, as an artist I use Blender, Gimp and Inkscape regularly), most of these are under the GPL. How many truly major end-user-facing software applications can you think of that are under permissive licenses? I can think of many under copyleft, and very few under permissive licenses. This is no coincidence. Assuming you wish to fight for freedom of the end user, and ensure that your software remains free for that end user, copyleft is an excellent strategy.

I have heard a mantra many times over the last number of years to "give away everything but your secret sauce" when it comes to software development. But I say to you, if you really care about user freedom: give away your secret sauce. And the very same secret sauce that others wish to lock down, that's the kind of software I tend to release under a copyleft license.

There is no reason to pit permissive and copyleft licensing against each other. Anyone doing so is doing a great disservice to user freedom.

My name is Chris Lemmer-Webber. I fight for the users, and I'm standing up for the GPL.