There's a ton of things going on in my life right now. A ton of things! Enough that it's been hard to do any blogging lately because I've been just so damned busy. And in the next few days there are some new things to announce as well, so I thought this would be a good opportunity to dequeue a bit before I make any further announcements.

First, let's start with MediaGoblin. We've passed our one year anniversary, and I feel we have an impressive set of things to look back on. Already we've surpassed my wildest expectations in a large set of ways: we have not only images support, but also video and audio support. We have OpenStreetMap support. We did a huge overhaul switching from MongoDB to SQL(Alchemy). (Okay, maybe that's not an interesting accomplishment generally, but it was a huge undertaking.) On the horizon are several other things, including plugin support, theming support, and hopefully federation stuff. If you're interested in such things, consider subscribing to the MediaGoblin news feed.

There's been a number of good articles about MediaGoblin recently, but here are two really good ones:

We've a bunch of cool things, and a really awesome community. We have somewhere around 50 people who have contributed to the project over the last year. I think that's really impressive for a new project.

And that's actually been one of the big themes of the last year: discovering I actually do have some fairly good leadership skills. Up until now I've mostly assumed I'm way too disorganized and distractable of a person to be a good leader. But I feel like the last year has proven me wrong. In fact, I feel that my long history of learning techniques to deal with my ADD in a sense has helped: I know how to write out plans for things in orgmode, break them into small tasks, and execute them. Fears of me not being capable to stay focused when working from home actually helped me learn to have very rigorous work habits. And having those traits has helped a lot.

Anyway, the MediaGoblin community is an amazing group of people, and I'm so happy to be working on the project. A little over a year ago I said:

We're still kind of running on hopes and dreams here, and hopefully those hopes and dreams can become true. It'll be a lot of hard work, but I think we can do it. At the very least, we need to try!

That statement is still true to some extent, but we're running on more than just hopes and dreams at this point. We have some real sites running the software (but we could use some more) and more importantly we have more than just an idea of a codebase, we have something very solid. It's been a thrilling year, and I'm looking forward to the next one.

This year at Creative Commons has been an interesting one, and somewhat of a mixed one. About a year ago there were some changes in the org and a number of people I care about have left. This includes my former boss, Nathan Yergler, and more slowly the stepping back of Mike Linksvayer, among others. Both of these people especially have been both friends and mentors, and it has been sad to see them go.

On the other side, the last year has been interesting in some other ways. Especially, I've been glad to see some other great people join, including Greg Grossmeier and my good friend Lunpa. These are both people I greatly admire, and over the last year I've seen them do some great things.

There has been another interesting thing too: in the void since Nathan Yergler left, I became the somehow official and yet unofficial tech team manager/representative. So, in addition to MediaGoblin, here is another space where I've learned quite a bit about leadership, including the fact that I seem to be decently competent at doing it. While I have done some programming work over the last year (particularly around simplifying CC's er... complex... translation tooling), I have more and more spent time on representation and planning. This was an unexpected shift for me, but one I'm glad I've had the opportunity to do. I feel I've had a lot of growth over the last year, especially in the areas of planning and "workplace diplomacy". I think that's one of the big lessons I've learned this year: the best way to think of yourself in a leadership position is that of a diplomat. There are usually a lot of things people want out of a situation... it's your job to identify what makes sense and to negotiate things, be a buffer, and help people do good. I wouldn't say I've been a perfect manager in this position, but I think overall things have been good, and I'm proud of the results I have had in the er... quasi-position. 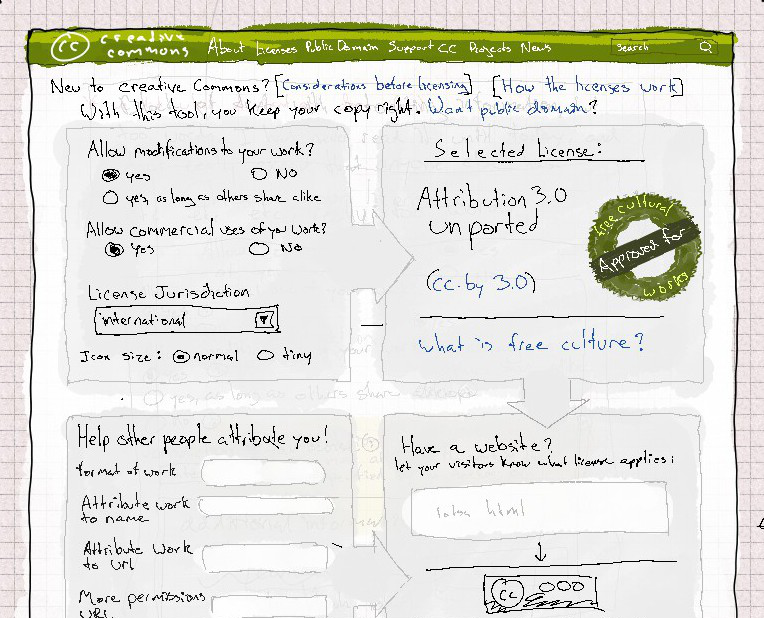 Interactive chooser mockup by Lunpa, not me.

Some other interesting things have happened over the last year as well. Part of these things are the projects that we are rolling out. One thing is a new, interactive chooser. We also have a legalcode errata tool ready to go, we just need sign-off on some information. Anyway, there have been other things too, but I'm particularly proud of the work the tech team has done, especially Lunpa, on this work. And it has been great to watch and help with... even though that help has been partly from a different, more manager-y perspective than I am used to.

Another interesting thing that has happened is that I've been more involved with license and legalcode work, especially in the 4.0 license process. But things actually started with the work to declare CC0 and GPL to be compatible and CC0 to be acceptable for free software usage (sadly, but possibly for the best, we submitted for OSI approval then later withdrew for reasons having to do with patents, equitable estoppel, and really long mailing list threads that you can read if you care to). I have been involved in several things, including trying to raise the visibility of complexities involving games, 3d printing, and functional content. There were a lot of points explained through that, but the most interesting bit is perhaps the issue of what happens in complex examples where functional and creative works are combined in particular and complex ways, and the former uses the GPL and the latter uses CC BY-SA, and there's an unintended incompatibility of copyleft licenses. This has lead to discussions between Creative Commons, the Free Software Foundation, and the Software Freedom Law Center about possible compatibility with CC BY[-SA] 4.0 and the GPL. Nothing is resolved at this time, but I am thrilled that this conversation is moving forward. I often comment that one semi-official role of the CC Tech Team is to be a bridge back to free and open source software, and this is probably an even more clear and direct example than most.

Anyway, as is probably evident above, it has been a mixed year, but a very interesting one that I'm glad to have been part of. And anyway, there's one more thing I haven't discussed in the above... 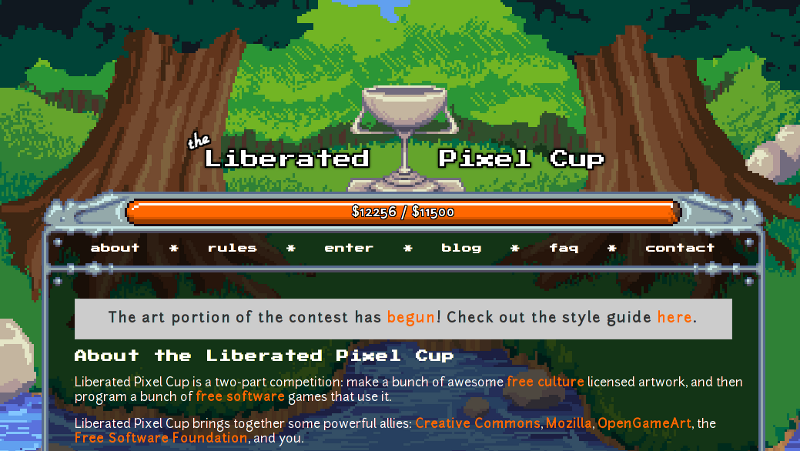 Liberated Pixel Cup! This project is in some ways simultaneously the most "unnecessary" appearing of projects I've worked on recently, especially at CC, and yet I think it is actually maybe one of the most important.

I guess I ought to say what Liberated Pixel Cup is. In a sense, visiting the site should probably tell you most anything you need to know, but here's a repeat of the tagline:

Liberated Pixel Cup is a two-part competition: make a bunch of awesome free culture licensed artwork, and then program a bunch of free software games that use it.

In a sense, merely bringing together these organizations on a common purpose feels like a huge victory for me: they're organizations that really agree on a lot of things but simply don't seem to speak to each other much. But even more significantly it brings together several movements in a tangible way: games are by necessity an overlap of culture and functionality, and in this way free software and free culture are directly intertwined.

The art portion of the contest is now under-way, but there was a "pre-contest" part of the game in which we ended up working out a style guide and set of base assets. I really encourage you to check out the style guide, assets, and mini "demo game":

Anyway, Liberated Pixel Cup is kind of my baby (well, I guess so is MediaGoblin) and it's great to see it moving along so well. The art contest has kicked off and we're already seeing some awesome entries.

I have a lot more to say on Liberated Pixel Cup as to the what and why, but I think this blogpost is already getting a bit wrong, so you can read this interview with me about Liberated Pixel Cup on opensource.com instead. Hopefully I'll get to writing that a bit more soon. The rationale might not be 100% self-evident, but I'm hoping the awesomeness of things even so far is. :)

Moving and my relationship

Another thing going on in my life is actually really more about my spouse, Morgan. I'm happy to say that she finished her Masters program here at NIU and we'll soon be moving from teh Deklabbs to Madison (where Morgan will work on her PHD) in mid-August.

Not much to say on that other than that I'm very proud of Morgan. We also hit our three year anniversary recently, so that's awesome.

There are a few other things going on in life. I want to wrap up this blogpost so here's a quick rundown:

I think there's more, but honestly I'm totally exhausted typing this all out, so I think that'll have to be it. But life over the last year has been a lot of things, but boring is not one of them. And the next year looks like it will be even more interesting, as you'll hear in the next couple of days... so keep your eye here.