On the MediaGoblin fundraising campaign part 1: FSF vs Kickstarter

By Christine Lemmer-Webber on Tue 16 October 2012

As those who have read my previous entries know, I quit my job of three years as senior software engineer at Creative Commons to pursue the free software project I've been running, MediaGoblin. I'd explain a bit further what MediaGoblin is but actually there's no reason to: we're in the middle of running a fundraising campaign, and we put a video together that explains everything wonderfully already. So what you really ought to do is click through to: 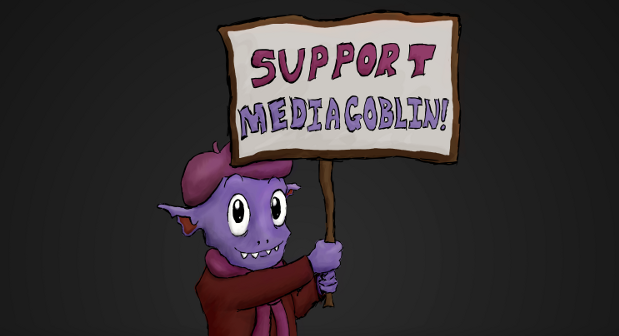 Go ahead visit the above link! Check out the campaign! Watch the video! Donate! Excitedly link the campaign to your friends! Then come back here. I'll still be around.

Okay, back? Awesome. So the campaign has gone live and is going well. It's been a major portion of my life the last couple of months. For the one and a half months leading up to the campaign, it was my life. And it still is. I stressed out about it all the way leading up to the campaign launch and I am, in fact, still stressing out about it now. But it's a good kind of stress. We're getting a lot of positive reactions from people, and I feel great about that. I really do believe that MediaGoblin is the most important thing I've ever worked on in my life, and so having this be a success is important to me. And having it be important to other people... well that's important to me, too.

There's a couple of things that people have been asking me about related to the campaign. People seem fairly curious about the process of making the video and ramping up the campaign, and especially I keep getting asked, "Why did you go through the Free Software Foundation? Why not Kickstarter?" Those are both really good questions, so I'll take a shot at answering them.

Why the Free Software Foundation? Why not Kickstarter?

Kinda long, so here's a tl;dr:

Let's go with this one first, because people seem so curious about it. What I'll first say was that this wasn't a decision we rushed into. A couple of months ago, I was in Boston and meeting with MediaGoblin co-conspirators Will Kahn-Greene and Deb Nicholson about this. We were hanging out at and around the FSF offices. At that point, we knew we were launching a campaign, but didn't know the details. And this was a major point of discussion: do we go with Kickstarter, or we go with the Free Software Foundation? We did know was that John Sullivan had expressed interest in us doing things through the Free Software Foundation, and so that was an option.

We chose the Free Software Foundation over Kickstarter for various reasons. The reason we didn't go with Kickstarter isn't that we dislike Kickstarter, or thought that it would be particularly bad for us. I actually think that Kickstarter is doing a good job in paving a way forward for projects to be funded in ways that frees them to focus on what they need to; if I have a major complaint, it's that I wish people would mostly hold projects to the standard that if they're donating to them, they shouldn't be locking down their stuff. If the public is funding you, doesn't it make sense that you are in a sense beholden to the public? I wish people would hold things they donate to to a standard where they encourage projects to adopt free licenses. But anyway, that's more of a wish that I wish we'd see more free software and free culture benefitting from Kickstarter like systems than something against Kickstarter. And Kickstarter was fairly tempting for various reasons: they've done a good job of proving themselves. We know their stuff works, it's fairly expected how stuff would run, and it's something people recognize and feel comfortable giving money to. My friend Aeva said, "When I see something on Kickstarter, I have a temptation to just throw money at it." So not choosing Kickstarter would mean leaving a lot of that behind.

So why did we choose the Free Software Foundation? There was reason to be cautious about it: we knew what to expect if we went with Kickstarter. While I have a lot of trust in the Free Software Foundation, we couldn't be sure how things would work out running a campaign like this because they simply hadn't done such a thing before. We had done something similar with the FSF with Liberated Pixel Cup, but it wasn't on this scale. When we met with John, we listed a series of things that we'd still need: we needed the ability for the system to offer rewards (such as the 3d model, t-shirt, etc options we have now), we needed the ability to theme the campaign page, we needed to be able to email people who donated with updates as the campaign progressed, we needed the form to work this way and that, we needed a progress bar that updated automatically each time someone donated, and so on. The FSF didn't have a way set up to do these things yet, and we wanted to go live with the campaign in a month and a half. Would the FSF be able to do it on time? Would the FSF want to do it? John said that he thought so, and yes. This was a direction that they were interested in going in, both for themselves and likely for future projects, so it was a good opportunity for them to push their systems in that direction.

At that point, we decided to go with the FSF. First of all, the fact that this was a new thing but that the FSF was interested in pushing in this direction means there'd be a certain kind of guinea-pig uncertainty, but it also meant something else: the FSF had a lot of faith in MediaGoblin and were willing to throw their weight behind it. That meant a lot, and also meant something strategically: there's a lot of projects swimming around on Kickstarter and etc right now, and it would be easy to get lost in that pool. The fact that the FSF was willing to back us meant that we'd stand out in a certain way, at least to a certain audience. And we could benefit from their connections and experience.

There's another aspect to it too: the FSF is a nonprofit. I'm not sure whether this is resonating with donors or not, but at least to me, it's significant: the FSF is an organization that has a mission and integrity. By going through the FSF, we are also beholden to that mission and integrity. The FSF wasn't going to just toss all the money raised by this project over to us: we had to show that we were doing the work to advance the project to get it. To me, that seems like a feature, at least one that's donor-facing (though I'm not sure whether or not people are picking up on that). You can have whatever opinion you want about the FSF, but one thing is indisputable, maybe even above any other org I know of: they stick with their principles. And I hope that message that the FSF was backing us passed on to people. And to some people, it seemed to. (I guess also, if you go through a nonprofit, donations are tax-deductable. Some people seem to appreciate that.) The FSF is also taking an "administrative cut", just as Kickstarter would, of the money raised. I think it's also significant that the organization that gets that cut be one who's working to advance things that I believe in.

There were some other benefits too: we had a lot more control over our site design by doing things on our own (and MediaGoblin's usual graphic designer, Jef van Schendel, was commissioned to do the design of the campaign site, and did an awesome job). But... I think the being endorsed by an organization with that kind of trust and integrity was the most important thing. And I'll also admit that there is an element of personal interest here: is it possible for a nonprofit to reproduce the same kind of experience that Kickstarter has? Because that's significant to me. And one thing that would come out of this is that the FSF would be using free software to run the campaign also. The thing is mostly run by CiviCRM, so unlike Kickstarter, advancements gained in running it could benefit the software and other people running such software. And if we could prove that this works, that would be good.

That said, even after we made that decision, even though I have a strong amount of trust in the FSF, the proof of the pudding is in the eating, and I couldn't be anything but nervous about things until the campaign actually went live. I'm happy to say that things did work out and we had a successful launch. People seem very responsive to our campaign, and the FSF's stuff is working great. And the FSF really has thrown themselves behind the campaign. I've been working with both people from the FSF systems team and especially John Sullivan and Zak Rogoff, one of the new campaigns team members (who's really been a pleasure to work with so far). They really have been trying hard to make this a success, and I'm really pleased with it.

And I guess that blogpost was long enough, so the "making of the campaign" will have to be a part two!