So, it's a bit strange writing about this since the film I'm about to talk about has been out for two months. I'm talking about Patent Absurdity, directed by Luca Lucarni, sponsored by the Free Software Foundation and with animations by... me! 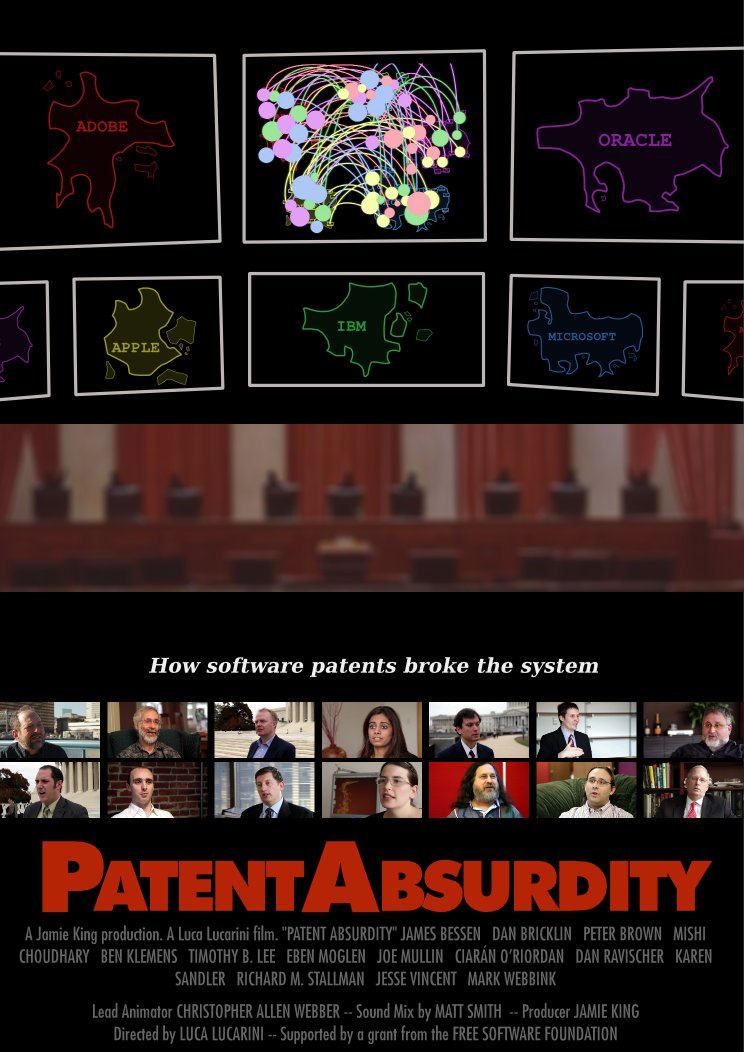 Actually, it's kind of surprising that I haven't written about this sooner, considering the first several months of the year this is mostly what I did in my non-work hours. Unfortunately I sustained a wrist injury right around the release that stopped me from doing any typing outside of work hours up until just a couple of weeks ago (it's healing but I still need to wear braces). Anyway, that's a separate story, probably worth its own post.

The film gives what I think is a really solid and enjoyable to watch introduction to what software patents are, their history, and the dangers they pose to the entire software ecosystem. It elicited a very positive response when released at Libre Planet 2010, and everyone I know who has watched to it has spoken highly of it. It could be that sample's response has to do with the type of people I tend to associate with, but anyway... I'm convinced that it's a good and fairly accessible film (accessibility being something something that these kinds of productions don't always end up being).

So there actually four types of animations in the film. There are some very simple graph animations, a moving timeline of software patent history, a "wargames"-type animation (what's featured on that poster there), and an ending sequence that I won't spoil here. Of all of these the wargames sequence seemed to elicit the strongest reaction from people, which is good because that's also the piece that involved the most effort. All of the animations involved Inkscape and Blender in some form, but the wargames animation also made use of Blender's new Python API, which is awesome.

In fact, just this thursday I gave a talk on Blender and Python in Patent Absurdity at ChiPy. (Thanks to Carl Karsten for doing awesome video recording, as usual. :)) Giving a talk on the Python API in Blender at ChiPy is something I've wanted to do for a couple of years, so it was great to finally do it. And the audience reaction was very positive. As you can see in the video, there were a lot of questions, and I got a lot of positive feedback (and even more questions) after the talk ended. Suffice to say I'm rather happy with things.

Oh yeah, and I've also released the Patent Absurdity animation sources along with a full README (HTML export here). While Patent Absurdity is released as CC BY-ND 3.0, I've released all the data (including the Blender and Inkscape files) for the animations as free culture under CC BY-SA 3.0 and the Python files as free software under the GNU GPLv3. So in case you wanted to see how those things work, you are fully free to modify, distribute and tinker with them... free as in freedom. :)